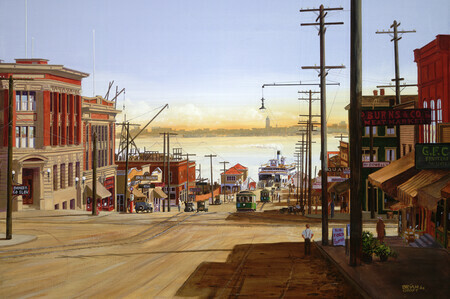 From an original painting by Brian Croft

“Lonsdale Quay – 1919” is one of the original paintings in my “Streetcars of Vancouver” collection. The collection is intended to bring to life the colourful and exciting story of the British Columbia Electric Railway Company (BCER) and its electrified streetcar and tram service.

When the first six brand new streetcars began operations on June 27, 1890, the only other city in North America operating electric streetcars was New York City. The first streetcar lines were installed and operated by fledgling companies, which were formed in rapid succession during the difficult early start-up years. First the Vancouver Street Railway Co, then the Vancouver Electric Railway and Light Co, New Westminster service was started by the Westminster & Vancouver Tramway Company and eventually Consolidated Railway and Light Company took over the combined financially troubled operations. New capital was eventually organized with the formation of the BCER Co. in 1897. Under the able leadership of Robert Horne-Payne the newly formed BCER began to flourish marking the beginning of what was to be a new and long era of success.

My painting, “Lonsdale Quay – 1919”, looks down North Vancouver’s streetcar tracks to Lonsdale Quay where Ferry #3 is at the Quay loading cars and passengers for the next crossing to Vancouver. Ferry service started to North Vancouver on May 12 1890. For the next 68 years many ferries served on this route; in 1900, the “North Vancouver”, later designated Ferry #1commenced service, in 1904 the “St. George” later becoming Ferry #2, was introduced followed by Ferries #3, 4 and 5. With the eventual development of Lions Gate and 2nd Narrows bridges the demand for these ferries dwindled and service was terminated in 1958.

BCER introduced streetcar service from the foot of Lonsdale on 3 Sep 1906. Eventually 3 lines were brought into service. Lonsdale, Capilano, and Grand Boulevard (later, Lynn Valley). So steep was the lower Lonsdale track (10.3% slope) that in later years a “safety switch (sand pit used to stop runaway streetcars) was installed at Second Avenue.

“Lonsdale Quay – 1919” shows automobiles driving on left, as was the case prior to 1922. The streetcar paint scheme is still dark green and gold and will remain thus until 1926 when BCER introduced the more familiar red and gold colours In the distance Vancouver’s skyline is dominated by the Tower building built 1912, at the time, the tallest building in the British Empire. It was also known as the World Tower, the Bekins Building and most recently the Sun Tower. If you hurry you might be able to make the next sailing from Lonsdale Quay.

This painting is linked to another Brian Croft print: “North Vancouver Ferry Dock – 1916”